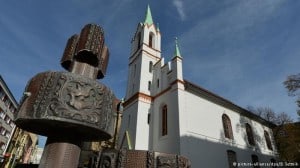 The northeastern German state of Brandenburg has welcomed its first synagogue since before the Holocaust, which saw 6 million Jews murdered by the Nazi regime. The Jewish community there was reestablished in 1998.

In a symbolic handing-over of keys on Sunday, the Jewish community of Cottbus in Brandenburg, northeast Germany, was presented with the premises for a new synagogue – the first to exist in the city since November 9, 1938. The night, which came to be known as “Kristallnacht” or “Night of Broken Glass,” saw a series of coordinated attacks throughout Nazi Germany and Austria against Jewish homes, synagogues, businesses, schools and hospitals.