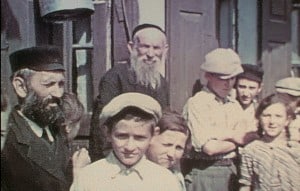 During a 1938 vacation to his hometown, Glenn Kurtz’s grandfather filmed the townspeople of Nasielsk, a Jewish community in Poland, just before World War II.

In 2009, Glenn Kurtz stumbled across some old family films in a closet in his parents’ house in Florida. One of the films, shot more than 70 years earlier by his grandparents while on vacation in Europe, turned out to include footage of his grandfather’s hometown in Poland.

“I realized it was 1938,” Kurtz tells NPR’s Rachel Martin. “And there are all of these beautiful images of children and adults in this town, one year before World War II begins. I was just haunted by these faces. They’re so happy to be filmed, they’re so excited to see these Americans coming to visit the town. And of course I know something that they don’t know — which is what’s about to happen.”

Kurtz set out to restore the film (which you can watch here) and find the people in it. The book based on this journey is called Three Minutes in Poland: Discovering a Lost World in a 1938 Family Film.