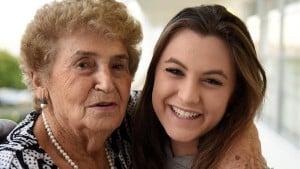 Some teenagers with a special interest in World War II are reaching out to a declining and often lonely South Florida community: Holocaust survivors.

“After the first time they came, I knew they would become part of my heart,” said survivor Clara Mond, 87, about her monthly visitors, Amy Freidus, 17, and her mom, Hindy. “They have given me something no wealth can bring.”
Amy Freidus, a senior at Donna Klein Jewish Academy west of Boca Raton, is preparing to go on the March of the Living, a two-week spring trip for high school students that includes visits to the concentration camps of Eastern Europe followed by a week in Israel. Her great-grandparents were Holocaust survivors, and her great-grandfather, 96, is a survivor from Lodz, Poland, where Mond also lived.