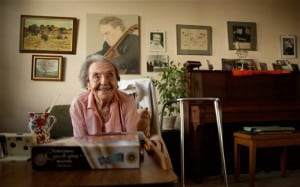 The world’s oldest known Holocaust survivor has died aged 110, her family have said.

Alice Herz-Sommer, who lived in London and was originally from Prague, was confined in the Terezin – or Theresienstadt – concentration camp for two years after the Nazi invasion of Czechoslovakia during the Second World War.

Ms Herz-Sommer was a renowned concert pianist who is said to have counted esteemed existentialist writer Franz Kafka among her family friends.

She was recently made the subject of an Oscar-nominated documentary, The Lady In Number 6: Music Saved My Life.