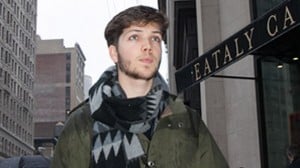 Just 18 and in a foreign county, Linus Jansen is living in a homeless shelter — by choice.

Jansen, of Frankfurt, Germany, is living in a shelter with 14 Jewish men and women, all aged 60 or older, as part of his own faith’s quest to atone for the Holocaust. The shelter is run by Dorot, a social service agency that provides services for older people, and is located in an old brownstone on Manhattan’s upper west side. According to Sara Peller, associate director of programs, Dorot strives to end social isolation and bring the generations together for their mutual benefit. Finding permanent housing for seniors who are homeless, or face eviction, is one of the services Dorot provides.

The lanky Jansen was assigned to work at Dorot’s shelter as a volunteer with Action Reconciliation Service for Peace, a German non-profit organization established by the German Lutheran Church to make amends for the Holocaust.

Jansen is one of this year’s 25 German secondary school graduates that Action Reconciliation has sent to the United States to work in agencies that help the poor, the mentally and physically challenged, and Holocaust survivors.

The literal translation of the organization’s German name refers to atonement, said Jansen, who says he does not feel a need to atone for what his grandparent’s generation did. “I don’t think that is my responsibility,” he said. But he says he will strive to do his share to bring the German and Jewish communities closer.

Jansen makes dinner for shelter residents, varying the menu. “I make a different salad each night, adding nuts or herbs to the greens,” he said.

Jansen also monitors clients who have been placed in permanent housing and invites them to join Dorot programs that make them feel part of a larger family. “Recently, we took a group to the circus,” he said. “We offer people things to see that are hard to afford in New York if you don’t have much money.”

Working in the homeless shelter has been a challenging learning experience for Jansen. “It’s made me appreciate what I have,” he said.

Jansen first learned he was being assigned to a homeless shelter on September 9, the day he arrived in the United States with the 24 other Action Reconciliation volunteers.

He says his experience in the homeless shelter has helped him realize how vulnerable people are.

“A woman resident who used to volunteer to work with the poor ended up in the shelter because of a series of unlucky events in her life,” he wrote in a recent diary entry. “It can happen to any one of us.”