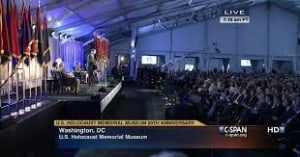 Former President Bill Clinton and Nobel Prize winner Elie Wiesel spoke at an event marking the 20th anniversary of the Holocaust Museum. Both recalled the dedication ceremony for the museum, where Mr. Wiesel called on President Clinton to do something about the genocide and ethnic cleansing taking place in Yugoslavia and Bosnia.