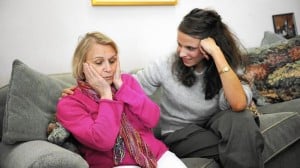 Stories have power. They can bridge divides between strangers and make them feel as connected as kin.

On the couch in her Encino living room on a rainy December afternoon, Paula Lebovics is holding hands with Olga Burkhardt.

“She’s my granddaughter,” the 81-year-old says proudly, pulling Burkhardt, 29, near — and it is true, even though it isn’t.

Lebovics is Jewish and a Holocaust survivor, liberated at age 11 from Birkenau concentration camp. On her left forearm, she bears the Nazis’ tattooed identification number.

Burkhardt is not Jewish. She lives in Germany. Her mother was born, the year Lebovics was rescued, in an underground bomb shelter as Allied bombs fell.