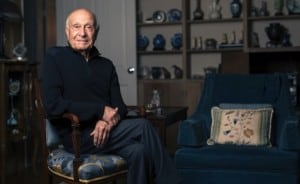 His voice cracking with emotion, his eyes welling with tears, Joseph Samuels, 84 and a retired Jewish real estate developer, recalled the pogrom’s angry Muslim mobs in Baghdad that his Iraqi family and the Jewish community there faced during the Holocaust. Known as the “Farhud,” this violent pogrom was carried out against the Jews in early June 1941 and has rarely been spoken about publicly by those who survived the massacre.
Samuels is one of a small remaining group of survivors of the Farhud, and during the past decade he has begun to write about and speak publicly about this dark chapter to various groups in Southern California.
“I was 11 years old when the Farhud broke out in Baghdad against the Jews,” said Samuels, who now lives in Santa Monica. “It was a horrible massacre of Jews for two days straight, with mobs of Muslims slaughtering the Jewish men, raping the Jewish women and throwing the little kids in the Tigress River.”
Samuels said Jewish homes and businesses in Baghdad also were looted during the Farhud, which was incited by the pro-Nazi regime in control of Iraq and by daily anti-Semitic radio broadcasts made by the Grand Mufti of Jerusalem, Hajj Amin al-Husayni. “My two uncles had their homes looted but escaped the mobs by jumping from the different roofs of homes in Baghdad’s Jewish quarter,” he said. “I was so frightened as a child — we brought furniture to reinforce the door in our home, which was located just outside the Jewish quarter. I saw Muslims looting outside, and I still remember them saying, ‘We’ll come back for you!’ since they knew which homes were Jewish because of mezuzahs.”
Although official records of the massacre claim nearly 180 Jews were killed and a few hundred injured, Samuels said the Iraqi Jewish community long has believed the number of Jews killed is closer to 1,000. He said he and his family survived the Farhud because British forces invaded Baghdad and stopped the violent mobs. Still, the memories of that pogrom haunted Samuels for nearly six decades, along with the painful memories of his escape with his brother from their homeland in 1949 due to the constant persecution of Jews. For many years, he said, he never even spoke to his children or anyone about his difficult life in Iraq, but he finally decided to open up after taking a memoir-writing class.
Click Here to Read Full Article