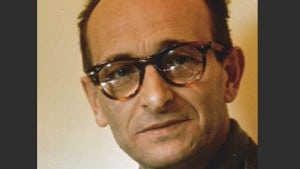 News coverage discusses the defense strategy of attorney Robert Servatius as he represents Adolf Eichmann, the Nazi SS officer who organized Adolf Hitler’s “‘final solution of the Jewish question'” and who was scheduled to stand trial in Israel on April 11, 1961, for his crimes during World War II.